Bar To Bar on a mountain bike - Tappa 1: Alba - Treiso

Start cycling from the historical centre of Alba in the direction of the Langhe’s Barbaresco wine region and get ready to experience one-of-a-kind landscapes immersed in the wonders of nature as you ride along the headland trails of vineyards and up to medieval villages perched on hilltops. This fluvial ecosystem along the Tanaro river has been gifted with the fertile terrain needed by the Alba White Truffle, as well as rolling hills as far as the eye can see, gorges and rock formations exposing the rich geological strata that makes this region so special. Surprises await you around every curve.

Leave Alba along Viale Cherasca. Once across the bridge, over the river and the subsequent level crossing, turn left onto Via Barbaresco, which comes to an end after about 300 m (325 yards) and turns into an uphill dirt trail (S2), that runs alongside a fenced property (watch out for the dogs) and leads to a steep wooden stairway. Once at the top, turn left onto the asphalt in the direction of Agriturismo La Meridiana. At the agriturismo, another dirt trail (S2) runs along the property and up the Altavilla hill. Keep to the left through the fields and hazelnut grove until the final climb to the right (S2). This will take you to the top of the hill and the paved road. The road will turn to gravel and take you through the Tanaro rock formations and the Pertinace Valley. This is the hill from which, on October 10, 1944, the Langhe resistance fighters descended onto Alba and occupied it, even though for just 23 days, a period in which the town was declared a republic and that was told by Beppe Fenoglio, a partisan himself, in one of his most famous works.

Across from you, you will see the first of the Barbaresco hills, covered in vineyards and dotted with famous farmhouses such as Rombone, Roncaglie, Pajoré, Marcarini, and more. The road near the last home takes a fork along a dirt road to the right, which runs around the property and takes you through the vineyards beyond the hill. This will head steeply downhill (D3, but there are fences and other barriers) and through the woods to the Seno d’Elvio river, close to where this waterway joins with the Tanaro. Here, a small bridge crosses the stream, so that you can then continue along the river and gorges immersed in the silence, fragrances and biodiversity of nature. These gorges are home to some of the most precious of the Langhe truffles, precisely because they are so isolated and pristine. The road runs by two signs dedicated to Fenoglio. Turn right after a couple of kilometres at the second of these signs and head to the Pagliuzzi farmhouse, which you will pass on your right. Cross the small bridge over Rio Sordo and return to a paved road near the Pora farmhouses. Continue on past the old Barbaresco train station (now a winery and tasting room, owned by an Australian), then turn left onto Via della Stazione, which heads up to the natural amphitheater of Martinenga, where memories of the ancient Romans (Emperor Pertinax was born around here) and subsequent Barbarian Invasions echo live in the place-names and archeological finds.

The five crus of this hill (i.e. Pora, Fasèt, Asili, Martinenga, and Rabajà) are among the most famous of all Barbaresco crus. You reach the crest near the small San Teobado Chapel, where the trail to the left of the road runs parallel to this road into the ancient village of Barbaresco, with its marvelous medieval tower (the current one dates back to the 14th century, erected by Visconti, and has been refurbished and is accessible), the village literally immersed in vineyards of Nebbiolo, the most regal of the Langhe grapes. You absolutely must take a look around this town and enjoy the local wine! Leave the village along Via Cavazza (next to Enoteca Regionale, in Confraternita di San Donato, a veritable temple of wine that is not to be missed), crossing the main highway and heading down to the small hamlet of Montestefano (another renowned cru, much like the nearby Montefico, Cole and Ronchi), which acts as a sort of viewpoint for the ancient village of Neive Alto. At the first house, turn left down a steep trail (D2) with switchbacks that starts out paved and then turns to dirt. Follow this to the bottom of the valley, where you will turn right into an enchanting poplar grove. Turn left after around a hundred metres and continue on parallel to the train tracks, then cross the tracks at the concrete overpass. Not far from there, you will arrive at Cascina Principe, where the road is again paved. Turn left to the intersection with the main highway.

Continue on past the main highway to the uphill trail (S2) to Cascina Montà. Pass this farmhouse on the left and continue up to the summit at San Cristoforo, where you find more vineyards. Keep left and head between the aqueduct basins on the paved road. Take the dirt road right after the last farmhouse and head to one of the most panoramic spots of the entire area, complete with a giant bench designed by Chris Bangle!

From here, head down a slow incline (D1) almost to the main highway, but turn left right before it along a lane, which will turn ninety degrees to the right and head steeply downhill (D3) to the main highway. Turn left here, then right at the next intersection (Trezzo Tinella). Cross the bridge and take the uphill trail to the right (S3). Keep to the left towards Cascina Castellizzano, which stands out on top of the hill. When almost to the top of the hill, turn right onto another headland trail. Once at the Castellizzano farmhouse, follow the paved road to the San Stefanetto Chapel (another pleasantly panoramic spot). Turn left here and head through the ancient hamlet of Bongiovanni (example of a small, fortified village with houses along the walls on both sides and which once had gates blocking the way at night), which is one of the two historic hamlets of Treiso (the other being Cravè, beyond the church square).

Treiso is often mentioned by Fenoglio (it was there that there was the first recruitment of the partisans escaping from Alba in order to avoid mandatory military service in Salò) and was also a source of inspiration for Piero Masera, the first modern photographer of the Langhe (his famous “Mattino sulla Langa” was shown at the Venice Biennale). In addition to the wellknown Barbaresco, the hill that makes an arc from Treiso to Madonna di Como is renowned among gourmets for one the Langhe’s most fragrant Dolcetto. 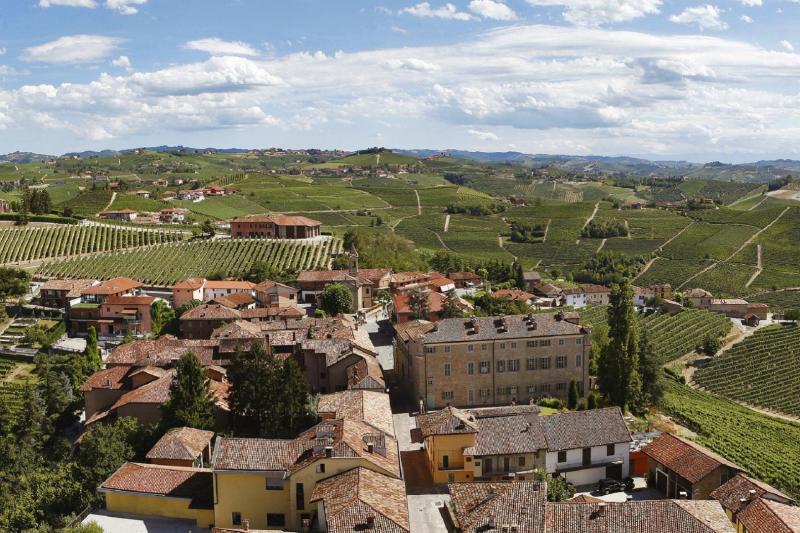