From Treiso, in the heart of the Barbaresco wine region, this leg takes you to San Bovo di Castino as you witness the shift in the landscape from the endless blanket of vineyards to woods, hazelnut groves and rock formations. These hills are steeped in history, from Roman times on up through the Italian resistance movement, but they also conserve memories of the poverty and hardship written about by Beppe Fenoglio in some of his most famous works of literature.

Leave town in the direction of Alba, then at the first switchback to the left, take the road to San Rocco Seno d’Elvio. Continue on this paved road until Cascina Alberta.  Just past the Cascina Alberta farmhouse, at the first big curve to the right, take the headland trail to the left, which runs past vineyards and hazelnut groves in the area of the deepest, most frightening of the Langhe gorges, the spectacular Rocca dei Sette Fratelli  (legend has it that seven faithless brothers cursed God during a religious festival, ignoring the pleas of their pious sister, so the earth opened wide and swallowed all seven, saving the woman on the crest between the two gorges).
Legends aside, the place is amazing, both for the breathtaking view and for the opportunity to see the stratification of the hill, which looks like a giant layer cake of limestone, clay, marlstone, sand, and sandstone — all of the features of Langhe soil in a single glance. The dirt road returns here along this strip of land (that saved that sister of legend) at Canta, where you will cross the main highway, then begin the climb to the right immediately after the partisan memorial and the first house. This will take you up to the watershed overlooking the main highway. Here, the vineyards gradually give way to hazelnut groves, and the hills grow harsher and wilder. Continue along the crest for a couple of kilometres and then head back down to the main highway. Go through a little hamlet along the paved road, then continue on to the nearby road to Bossania. Immediately to the right, another dirt road will take you back up to the crest. The view from here is amazing and must be what Fenoglio and the other resistance fighters experienced themselves in their day.
Head back down to the hamlet of Cappelletto. After going through the intersection for Trezzo Tinella, take the first road and then immediately turn right up a gradually rising dirt road, which runs in a wide arc to the local highway at a house next to a wayside shrine and, across from, a wood hut. From here, the trail continues down to the right along a slight descent through hazelnut groves, making a wide arc first downhill and then uphill (D2; S2) to the ancient hamlet of Riondino, an excellent example of fortified farmhouse and now a charming roadhouse. Now back in the heart of Fenoglio’s Langhe, the setting of some of his best novels, everything we see recalls a recent past (a mere 50-70 years ago) made of fratricidal war and misery.
At Riondino, turn right and head up another dirt road (D2) into the woods (the trail is well marked on the trees). Continue on to the summit, where the many beehives give an indication as to how good the honey is here in the Langhe. Keep to the right and head gradually downhill (D1) until the paved road. Follow this road to the right for about a kilometre, then head up again to the left on a dirt road that gets gradually steeper (S1-2) and takes you to the legendary Cascina della Langa, the farmhouse where Johnny the Partisan (the hero of the Italian film of the same name and of the Fenoglio novel on which it was based) spent one terrible winter in 1944 in the company of a dog named “La Lupa”. The trail heads down slightly into the hazelnut grove (which gives just the right amount of privacy to the farmhouse, that is now another charming inn) and then back up just past the house in the adjacent parking lot. Now continue along the crest in the woods towards Boscasso and Pavaglione. At the next fork in the road, both trails will take you to the hamlet of Pavaglione, but you’ll want to go to the right and head down past goats and donkeys to Pavaglione, the setting for Fenoglio’s “La Malora” (“Ruin”, English edition) about Agostino Braida, a poor servant who sought, in vain, to help his family out of a fate that was stronger than he.
The Agostino and Tobia farmhouse here is now a cultural center for conferences and exhibits, as well as for readings of Fenoglio’s work. Beyond the village to the left, the trail heads back up to the crest and runs through the trees to the small San Bovo cemetery. Once back down on the paved road, you will reach the remote, romantic village of Castino, immersed in the woods. San Bovo is a favorite stroll among Alba locals, who know how to find a friendly home with an eatery, rooms and a café or wine bar, as well as horse stables for a ride through the Belbo Valley. Mushrooms and truffles hide in the woods and steep hills here, and the best spots are protected jealously and written down in secret, encrypted notebooks like a witch’s book of spells (and legend has it that the spirits of witches inhabit these Langhe woods). 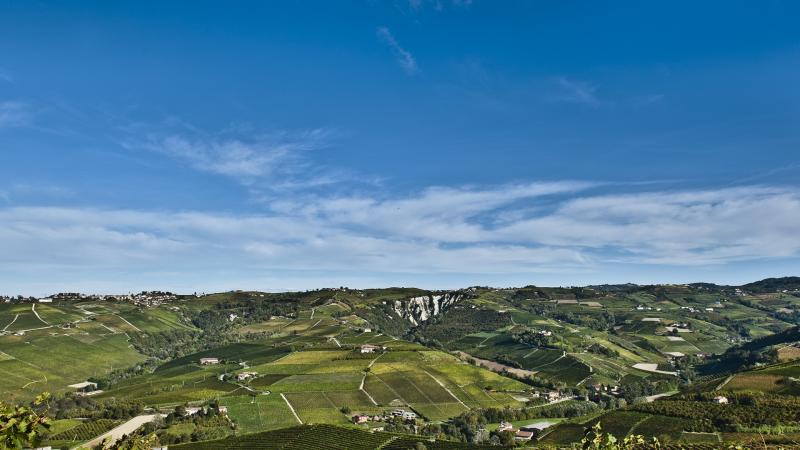