Tour of the 5 towers in the Asti region of Langhe

In this territory the so called “Giro delle Cinque Torri" (Tour of the Five Towers) winds its way: from the historical ring-route that takes place on the ridges of the Langa Astigiana, crossing the municipalities of Monastero Bormida, Bubbio, Loazzolo, Cessole, Vesime, San Giorgio Scarampi, Olmo Gentile and Roccaverano, it is possible to reach the Unesco World Heritage areas to the north and the Ligurian Apennines to the south and from here the itinerary of international importance Alta Via dei Monti Liguri.

This part of the Langa still has its original characteristics: at the same time harsh and sweet, wild and cultivated, rich in history, monuments, flora and fauna. In particular, you can admire and visit the medieval towers that stand out along the way, immobile witnesses of history.

Towers, woods, vineyards and meadows characterize the heights, while down in the valley the river, sometimes slow at times impetuous, tells its stories to the poplars that accompany it. The landscape is never identical to itself, not even on the same day: lights, shadows, colours, wind, scents change. Set in a particularly evocative natural setting, sixteen villages form this territory between Piedmont and Liguria, between the plain and the Apennines, between the Langa and the sea. They are ancient villages, which in part have preserved medieval urban structures, with their castles and cloistered towers dominating the high hills, sandstone churches and rich baroque parish churches, cellars dug into the tuff and “ciabots” scattered around the vineyards. Here is the Langa Astigiana, the land where stone, wind and wood reign supreme. Robiola DOP di Roccaverano, Loazzolo Passito and the other great wines of Acquese and Astigiano, the artistic and naturalistic heritage, the presence of sports facilities, fairs and popular festivals, opportunities to buy products and the presence of restaurants of national level are just some of the good reasons for a visit.

A few lines are not enough to describe the countless riches of a territory such as the Langa Astigiana, which needs to be “lived" to be appreciated. And what better way to experience a territory than to get to know it step by step along an itinerary that will lead you to discover landscapes, villages, vineyards, gullies and especially testimonies of a past rich in history.

This is the Tour of the Five Towers in the Langa Astigiana.

A Grand Tour that connects the historic ring-route that connects the towers of Monastero Bormida, San Giorgio Scarampi, Olmo Gentile, Roccaverano and Vengore with the UNESCO World Heritage territories to the north and the Ligurian Apennines to the south and the itinerary of international importance Alta Via dei Monti Liguri.

The roads are partly asphalted, white roads, cart tracks, paths in the woods and meadows; it can also be walkable by mountain bike with the exception of short stretches in the woods where you have to carry your bike on your shoulders. Clothing must be appropriate for the season: hiking boots are recommended. 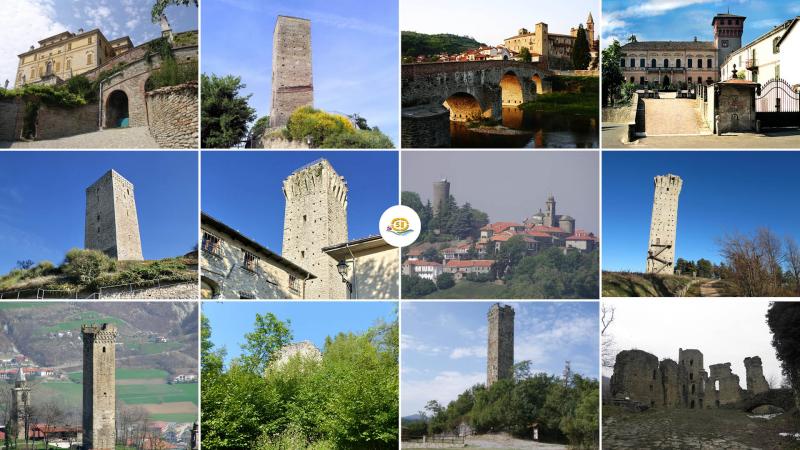