From Roddino, a village on the border between the Alta Langa and the Barolo wine region, you will now return to the winemaking heart of the area as you pedal among some of the most famous of the Barolo crus and stop to visit amazing villages that are simply overflowing with history.

Leave Roddino in the direction of Serralunga. Once at Madonna della Neve Chapel, take the grassy trail to the right that runs along the side of the hill, then follow along the Bricco del Gallo road (initially paved to the left, then immediately to the right). After the agriturismo, head under the road to the left, initially on a dirt trail and then to the right on a grassy trail through the vineyards and then a hazelnut grove. The road heads down gradually (D1-2) and into the woods before becoming a dirt road again near the base of the valley. Once back to the main highway, cross the highway and head back up to the village of Sinio, which features a castle and is situated almost vertically above the valley, so take the stairs to cut out the steep roadways of the village and take the church road to reach the upper square of the town hall and the castle (which is now a hotel). Turn left onto Vicolo del Castello, then turn right at the RV parking area to begin the climb to Montelupo.
After about 50 metres, take the first dirt trail to the right (S2) and follow it through the hazelnut groves to a village house. Turn left here and head up (S2) for a couple of kilometres and continue along a brief stretch of paved road in the hamlet of Protto. The paved section ends after Gabusi (rapid succession of right, left, right), then continue on the grassy trail to the left. This trail descends gradually near the village of Montelupo and past a gorge (which you will pass on the right as you turn left). Once past the bridge, you will arrive at a group of houses. After the last farmhouse, the road gets steep and becomes a narrow road (D3) through the woods and vineyards, remaining very steep and rocky. Continue down through the fields and hazelnut groves, always keeping to the left until the Bricchi farmhouse.
The descent remains very steep (D3 extreme); continue keeping to the left. After two gravelly switchbacks, the road will again be paved past Sinio in the direction of Valle Talloria. Cross the highway to Valle Talloria and take the dirt road that heads down to the Talloria ford before heading back up steeply (S3, beyond the ford take the fork to the right) into the woods and then vineyards to the hamlet of Cerrati. From here, head down the paved road back to the main highway, which opens onto one of the most beautiful of the Barolo landscapes. Nearly all of the great Serralunga crus are found on this side, which overlooks the hamlets of Ginestra, Castelletto and Perno di Monforte. Right below you, you will see the famous Lazzarito. To the right of this is Meriame, with Garombo, Marenca and Parafada to the left. Turn left and head to Serralunga, the most medieval of the Langhe villages with its castle dominating over a single circle of homes. Go through the archway to Piazza Umberto I with the main tower of the Falletti Fortress looming above. Don’t miss the opportunity for a visit to the castle (a national monument and museum that has maintained its defensive features intact) and of the main street. Leave the town via Piazza Cappellano, from where you can also admire the vineyards of Vigna Rionda (perhaps the town’s most celebrated cru), and head along the paved road to the crossroads for Collaretto (another famous Barolo vineyard) to the right and then, once past the village, follow the dirt road in front of you, which heads down (D2) through truffle plants to the waterway below. Cross the waterway and continue to a threepronged fork in the road. Take the middle fork, a rocky trail that heads up steeply (S3 extreme) through the woods and out to the Ginestra vineyards.
Continue on the paved road through the hamlet, past a few sharp switchbacks and a cemetery, and then down, at last, to Monforte. Monforte is another charming town and features the Saracca, the oldest part of town that rises steeply up to Palazzo degli Scarampi and the Horzowsky Auditorium (where the best jazz festival of the entire Piedmont region has been held every July for over thirty years), but which you will do in the downhill direction. The roads in this village are worth exploring in detail, and you will find a great many locales and lodging to serve your needs. The bell tower that rises between the Oratory and the Confraternity is the most significant sign of the medieval castle that once occupied the entire level area here. In 1080, the Cathars (although they were actually Manichaean) barricaded themselves to resist the militia of the Pope in what remained of the first case of heretic persecution. The poor inhabitants of the town were dragged in chains to Milan, where all 300 were burned at the stake. (Corso Monforte in Milan was named in memory of this event.) The sad fate of the Cathars brings us back to the historic reality of these hills that have seen an endless series of invasions from realms near and far, incursions, and epidemics brought by mercenaries. The sheer number of chapels, churches, monasteries and nunneries (many of which have now disappeared) is explained by the vulnerability of these communities, which finally found a bit of peace and order with the rise of the House of Savoy in the Piedmont region in the late 17th century, following the Thirty Years’ War. 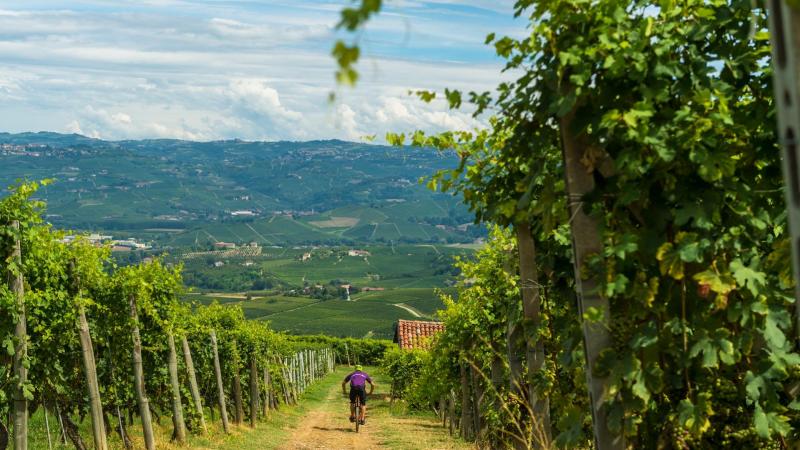