Another leg immersed in the Barolo wine region through the most famous, most sought-after crus among wine lovers around the world, as you take in this sea of vineyards from a privileged vantage point in La Morra.

Leave Monforte on the paved road to Barolo and continue on until the Church of San Pietro, where you will take the road to the right to Bricco. Continue along the paved road, in a half circle around the wooded hillside, until you find a headland trail that descends through the rows towards Cascina Sòt, then briefly joins the main highway to Barolo to the right. After a few yards, take the road to the left to Panerole and then turn immediately to the right between the first homes and head slightly uphill. After the final home, the road turns again to grass. Head over the crest of the hill and descend gradually (D1) into the valley below Novello. Here you will keep to the right at the various forks (all marked), while you enjoy the tranquility of this valley surrounded by vineyards and dotted with willow trees.

The main route, though, heads to the right just past this point to take the old road to Terlo, a famous Barolo vineyard, which takes you along a false flat to the village, following the gentle ups and downs of the hills. Descend into Barolo from above along Via Vittorio Veneto, right above the historic wine cellar Cantina Pira in the upper square of the town. The road that continues downward runs between the houses and the Art Nouveau buildings from the 19th century expansion of the village. At the next crossroads, you will enter the medieval part of town and end up at Falletti Castle (now home to the Barolo Regional Wine Centre and the WiMu - Wine Museum), the local church and the confraternity in the manner typical of all Langhe villages. Thanks to the noblewoman and philanthropist Juliette Colbert Falletti di Barolo, modern Barolo wine was born here in Falletti Castle, or, more to the point, it is one of the three historical birthplaces, together with Grinzane Cavour through the efforts of Count Camillo Benso and Verduno with King Charles Albert. Juliette Colbert Falletti di Barolo, whom Pope Francis has recently named Venerable and who is said to be on her way to sainthood alongside the many other “Social Saints” from 19th-century Turin (including John Bosco and Giuseppe Benedetto Cottolengo, just to name two of the most famous), will also be remembered for her countless charitable activities (for orphans, single mothers, prisoners, and more) throughout her life as a widow and for her support (being from the Vendée in France) for the ideas and impulses of the unification movement in Italy (including hiring Silvio Pellico to serve as librarian). Be sure to also save time for a visit to the Corkscrew Museum, featuring Paolo Annoni’s private collection of corkscrews. The itinerary continues from the upper square where you entered the village earlier.
Head out in the direction of Alba and go past the roundabout to Novello (first exit), take Via Bergesia to the left and head steeply downhill (D3) from Cannubi (one of the most important of the Barolo crus) into the valley below. From the crest at Cannubi, you can look out over the hills of La Morra, which reigns supreme in the Barolo region with its 513 metres of bulwark against the cold winds of the Cuneo plain to create the unrepeatable microclimate of this unique area. Laid out before you are the crus of Sarmassa, Fossati, Cerequio, La Serra, and Brunate, all of which are much loved by collectors for their unmistakable elegance. Climb right back out of the valley up the headland trail (S2) through the Sarmassa and Cerequio vineyards and to the small village that is now home to a charming inn immersed in vineyards. The next climb, which will take you to La Morra, is one of the steepest anywher in the Langhe (S3 extreme, but fortunately paved) and heads practically straight to the Fontanazza crossroads (if you head down to the right from here, you will soon arrive to the Barolo Chapel, a crazy work of pop art by Sol Le Witt and David Tremlett). Continue along the hillside and into town after a final climb (S2).
La Morra is worth riding through from end to end, starting from the ramparts and following the checkerboard of roads that climb up to the bell tower (the remnants of the village’s castle, much like at Monforte). The square that everyone refers to as “Piazza del Belvedere” earned its name for the way in which it overlooks all of the Barolo vineyards. A good map at the top of the square will help you in identifying the villages that dot the horizon, as you look out across the hills to the impalpable border between Piedmont and Liguria and the sea beyond. Just this year, the statue of the vigneron revealed a traditional “secret” of these parts at its base: a stock of bottles of Barolo wine (from the year in which the statue was erected), which were hidden there as a sort of time capsule for the lucky discoverers to enjoy as they recall the wine’s producers. Leave La Morra in the direction of Verduno.
After a few kilometres of paved road, take the dirt road to the right at Loreto, which will take you down (D1) to the Loreto Chapel (on your right). Continue on to again cross the main highway. After another kilometre, take the aqueduct climb to the left and then head back down (D1) to the village of Verduno. 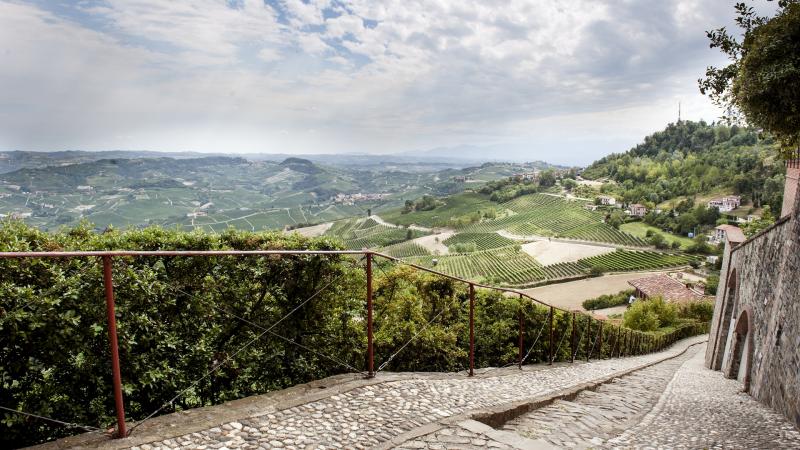